The magazine is banned in India but people can access it on the internet.

“It is not an easy task to be nude in front of the camera and look good at the same time,” Sherlyn Chopra said.

The actress revealed that she had written to Playboy expressing an interest in posing – and the magazine got back to her “within three to four days”.

“I have become the first Indian to pose naked for Playboy and nobody can take away that achievement from me,” Sherlyn Chopra said.

“My sister is proud of my achievement. I haven’t told anything to my mother, but I think I will visit her and tell her that she has to accept me the way I am.”

The actress, who has played some small roles in Bollywood films, said she had visited Hugh Hefner and his friends at the Playboy mansion in Los Angeles. 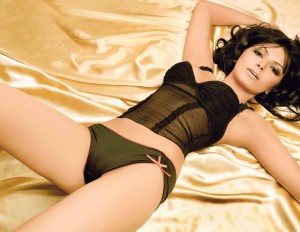